The Bathurst community celebrated New Year with a family evening of picnics and fireworks at the Adventure Playground in Durham Street opposite the Bathurst Hospital.Thousands of children and parents were treated to a spectacular display of the sky lit with sparkles.Music was provided by several bands which added to the celebratory nature of the evening. 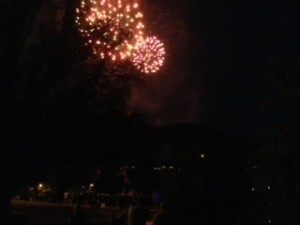 2015 is a special year for Bathurst as it is 200 years since the first settlement in this area. The focus for the year will be the beginning of May when many events will be presented to mark the significance of this time. Bathurst has a strongly developed sense of community. There are cultural groups involved with the Fine Arts and we have a regional art gallery that is the envy of many regional cities around the country.The Conservatorium of Music has been responsible for the training of generations of musicians who now perform in choirs ,orchestras and other groups.

The council has poured much money into developing fine sporting fields which enable the development of our young people’s skills on and off the field .The new Aquatic Centre is used by young and old alike and enables everyone who so desires to maintain a level of fitness.

During 2015 we will see how Bathurstians and visitors to our fine city become involved with our community.

In Rachel Ellis’ exhibition showing at The Bathurst Regional Art Gallery from 8 June until 5 August 2018 we can see the results of her “Plein Air “ studies of the Bathurst region’s landscape and streetscapes and also some interiors of Haefliger’s Cottage at Hill End ,near Bathurst. Titled “Sustaining Light”, she says of her work “ I was drawn to … END_OF_DOCUMENT_TOKEN_TO_BE_REPLACED